This Is A Custom Widget

This Sliding Bar can be switched on or off in theme options, and can take any widget you throw at it or even fill it with your custom HTML Code. Its perfect for grabbing the attention of your viewers. Choose between 1, 2, 3 or 4 columns, set the background color, widget divider color, activate transparency, a top border or fully disable it on desktop and mobile.

This Is A Custom Widget

This Sliding Bar can be switched on or off in theme options, and can take any widget you throw at it or even fill it with your custom HTML Code. Its perfect for grabbing the attention of your viewers. Choose between 1, 2, 3 or 4 columns, set the background color, widget divider color, activate transparency, a top border or fully disable it on desktop and mobile.
Toggle SlidingBar Area
FacebookTwitter

Gaylane Scott is mixing his passion for sports with his natural communication talent as a host of his own radio show, The Gee Scott Show, on 710 ESPN Seattle.  Gaylane is also an Emcee for the Seattle Seahawks , an auctioneer, and a motivational speaker! This high powered professional wears several hats and he’s loving every minute of it!

Gaylane spent 11 years as the dedicated car detailer for the Seattle Seahawks. During those 11 years, he developed relationships with Seahawks players and front office personnel which has led to amazing opportunities, an endorsement deal, and a career that most people dream about!  His words – “What I do every day is probably better than most people’s vacations!”  You’ll see in my interview with Gaylane exactly what happens when you see an opportunity and decide to just go for it!

Being a Radio Host seems like a very cool gig! How did you get into it?

Two years ago, me and a friend were talking about getting into radio. My friend happened to know someone at 710 ESPN and was able to get us an opportunity to do a 15 minute demo at the station. The demo was fun and so successful that they asked us to come back to do a podcast.  After doing the podcast for about a month, 710 ESPN said to us, “We’re going to give you guys a chance to go on live and do a real show.”  I had been cleaning cars for the Seattle Seahawks for 11 years and knew Marshawn Lynch (Running Back, Seattle Seahawks) personally.  I asked Marshawn if he would come on the show and do an interview with me because that would help give us some credibility in this new media world.  Marshawn doesn’t do interviews, but because of my relationship with him, he granted me the interview.  And, the rest is history.  I was permanently hired on as a Radio Host at 710 ESPN Seattle.

How does someone outside of Seattle listen to your radio show? 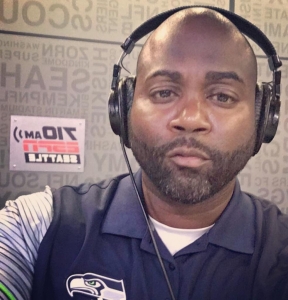 Very cool! Tell me about your role as Emcee for the Seattle Seahawks and how you landed that opportunity.

A Seattle Seahawks employee whose car I used to clean saw my transition to radio and thought that I might be a good Emcee for the 12 Tours.  A 12 Tour is where a few of the players, the Sea Gals, and the Blue Thunder actually go out on tour to visit with Seahawks fans.  He really went out on a limb and trusted that I would do a good job.  The Seahawks organization liked what I did during the first tour.  So, I continue to do their tours. And, I just recently got hired to be their Emcee for Touchdown City during their pregame celebration and during games. 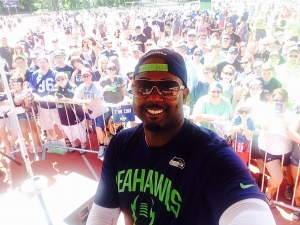 Tell me about your endorsement deal.

My endorsement deal is with Mazda of Everett. They give me a different car once a month to drive. It’s an opportunity to show their brand new vehicles. I get to drive around and show people the latest and greatest of what’s new at Mazda.

I don’t personally know any auctioneers. How did you get into that field?

There’s a prominent auctioneer here by the name of John Curley.    He’s one of the top auctioneers in the United States. He asked me if I would go with him to one of his auctions to spot for him while he conducted the auction. I had never been to an auctioned event, so I thought that it would be cool. I watched how he worked and controlled the room.  It was really cool.  At the end of the night, I asked him, “How many black auctioneers are there?”  He said, “In this area? None.”  So, when he said that there were no black auctioneers in this area, I thought to myself, “Somebody at some point might want a black auctioneer.”  I got on my phone and looked up Auctioneer schools.  I found one in Billings, Montana where I ultimately traveled and attended the program for 2 ½ weeks to become a certified Auctioneer.

Wow! What has your experience as an auctioneer been like?

It’s crazy. I never woke up one day and said to myself, “I wanna be a radio personality or motivational speaker or an auctioneer.”  I never had those thoughts.  It was a snow ball effect.  One opportunity led to another and it kept getting bigger and bigger.  And, as I was doing these things, my father was continuously telling me I could do it all.  My dad motivated me through it all. He told me that I could do everything. He was my biggest cheerleader the entire time.

How much do Auctioneers make? 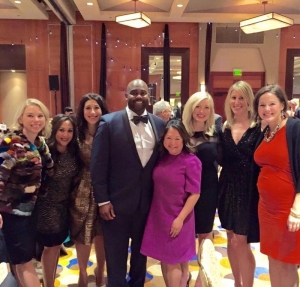 You obviously love what you do. How did you know you had found the perfect fit?

There’s a saying that you should always do what you love. And, whatever you choose to do for a living, should be something that you would do for free.  I would hear people say that and I would say, “That’s not real.” I didn’t think that it existed unless you’re a professional basketball player.  I never really thought that those sayings applied to the common man or woman. Unless you were an athlete or entertainer, no normal job would be like that. But, when I go to work every day, I seriously have to pinch myself and wonder if I’m dreaming. What I do every day is probably better than most people’s vacations. I have the opportunity to talk to people and I get paid for it.  I get to meet different people.  I get paid for my opinion.  To be able to do that is a blessing.

Before my father passed away, he would text me every single day from Chicago after my radio show and say, “Great show, I’m so proud of you.” To be able to show the man that taught me everything my whole entire life, that all of his hard work was paying off, is an incredible feeling. 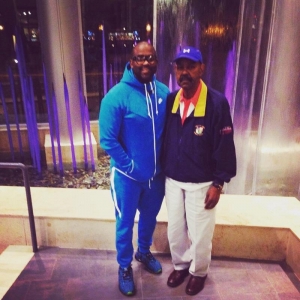 You’re very busy and wear a lot of hats. How do you balance priorities?

I remember in 2008, I didn’t have money for my kids for Christmas. I had $25 the night before Christmas. I took $20 and purchased each of my kids $10 worth of toys at the dollar store. My kids were so happy to get those gifts for Christmas.  It’s moments like those that shape you and help keep everything in perspective where you’re not too crazy or busy for anybody.  I had years of hard times to really appreciate where I am right now.  At the end of the day, if most people took the time to stop and appreciate what’s going on, they’d feel less busy and less stressed.  Just appreciate what’s going on right now.

What’s been the greatest challenge that you’ve overcome?

In 2009, I didn’t have a place to stay and had to sleep in my car. The hardest thing about this time was that it was a secret.  No one knew that I was sleeping in my car.  I never shared what I was going through with anyone, including my father. I put on a façade that everything was going so right in my life. Everyone thought that everything was great.  Meanwhile, I’d have to go to the gym to take a shower. It was hard to look at myself in the mirror. I was at the lowest point in my life. I felt like I had failed. It was hard to overcome my low self-esteem.  After sleeping in my car for a week, a friend of mine asked a mutual friend, Lyndsey Anker, if I could stay in one of her rooms.  I had no money, but Lyndsey opened up her home.  I paid her little by little.

I’ll never forget what ultimately led to me building my self-esteem back up. I was still cleaning cars and I ran into Rob Sims (Former Seattle Seahawks player).  Rob said, “Man, where have you been? You haven’t been cleaning the cars lately.”  He said, “I have some cars for you to clean.” I began coming to his home to clean cars. One day, I woke up and had a judgment against my bank account and my account was negative $675. Rob loaned me the money so that I could take care of my bank account.  From that time on, I started to work it off.  I cleaned cars for him and I was his driver. At the time, Rob was the only person who knew what was going on with me.  He offered to let me stay at his place. He wanted me to have a place where my kids could come.  It was at Rob’s house that I built my self-esteem.  And, that’s when things moved forward for me.

You’ve accomplished so much! So tell me, what’s next?

I love what I do now. There’s nothing that I would change.  Starting this week, I’ll be doing a Seattle Seahawk’s podcast.  My ultimate goal is to one day travel the United States speaking to the younger generation. I feel that there’s a need for kids to get a positive word. There’s a need for the younger generation (Ages 12-18) to hear motivational messages to help deal with issues like peer pressure and social media.

What kind of motivational speaking do you do now?

I tell my story. I talk about battling through adversity.  The core of my message is the quote  – Whether you think you can or think you can’t, you’re right.  One thing that I tell kids all of the time, which is something that my dad told me, “I can do anything. There’s nothing I can’t do. I’m already great.”  I begin and end all my speeches with that.

The biggest lesson that I want share is it’s really important to find out what motivates you. And whatever that is, whether it’s your kids, your siblings, your parents, your friends – figure out what it is and let it drive you.  Also, if you hang with chickens, you will cluck. If you hang with eagles, you will fly. Tell me who the top five people are who you talk to on a daily basis.  Those five people are a very big influence on your life. We tell kids we want them to hang around the right crowds and do the right things.  But, as adults, we have to do the same thing.  During my journey, I’ve really started to pay attention to the circles that I’m in.

Khalilah Starks, HR guru and founder of High Powered Professional, is a career expert dedicated to helping professionals find and follow their career bliss. Khalilah is a career success enthusiast and loves all topics related to personal and professional development. She has served as a career expert on a CBS Morning News Show and has been featured in several national online and print publications.